skip to main | skip to sidebar

As you can tell, it has been almost two years since my last entry. Needless to say blogging isn't my strong suit. Many things have happen, but I hope things will calm down enough to get back into writing soon. So many story lines and so little time!
Posted by Marianne at 9:30 PM No comments:

Crossing Fingers that 2010 is a Better Year

Well, things didn't work out as planned. My sequel, Twas the Flight before Christmas, didn't fly this year. Things were just too crazy for me since Dad's passing and I couldn't give Cal and Varick's story the time they deserved. My editor, Jay, is the best person in the world. She understood completely and has been very patient and supportive throughout this whole ordeal. I couldn't ask for a better editor or publisher, Tina from eXtasy Books as well.

I made a promise to myself that I would complete as least one if not two stories by summer. I owe Jay that much as I have signed up for a Tarot Card story and a Rose Garden story, both of which I have storylines for, just the small matter of sitting down and getting them from my head to the written word. Wish me luck!
Posted by Marianne at 9:51 PM 39 comments:

Sequel to Far Away Promises - Twas the Flight before Christmas

First, I need to state that I have the most awesome publisher and editor ever! Tina and Jay from eXtasy Books are two wonderful people and I am very lucky to be able to work with them. 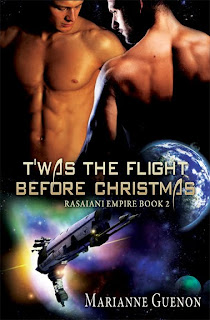 I wanted to post the cover for my upcoming Christmas story. It is a sequel to last year's release, Far Away Promises, with more exciting adventures with Cal and Varick. Will post an excerpt once it has gone through the editing process. Keep an eye out for it on December 15th!
Posted by Marianne at 7:30 PM No comments:

Well, I promised myself I would keep up with this blog, but this year has been one helluva rollercoaster, both personally and professionally.

I was very fortunate to obtain an exciting new job right before the one I held for almost five years ended and I have loved every minute of it since. It really does matter to enjoy doing what you do for a living. It makes a world of difference and has been a big help to me.

After moving in with my dad over a year ago and taking care of him, his many health issues finally got the best of him. He passed away on October 14th. Between my fulltime day job and assisting dad at night, there hasn't been much time for many other things. Since his passing and once we get his affairs all settled, I hoped to keep this up to date as much as possible as well as catch up on my writing. Look for some exciting stories from me in the near future!
Posted by Marianne at 7:19 PM No comments:

Yes, I have taken the plunge and signed up on Twitter. It is actually quite fun and a lot easier for me and my crazy life to update than my poor neglected blog as you are limited to 140 characters for each tweet. I do promise, however, to keep this more current in the near future.

I'm hellbent determined to finish this year.For those of you who are wondering what the heck is NaNoWriMo, it is National Novel Writing Month, an online annual event that takes place every November. The goal is to write a 50K word novel about anything as long as you write the entire story between Nov 1-30.
Even though my first two stories for eXtasy were m/m alone, I have been pestered as of late by three characters in a scifi menage. Two very sexy male aliens of different races and one spunky female human who happens to be a scientist into goth in a big way. Sounds promising so far? Well, let's add the fact one male is from a warrior demon species who happens to be owned by the other male (Now you know there's going to be hot m/m sex in one of my books, LOL!)Throw our goth scientist in the mix, stirring things up for the boys, and, well... you'll just have to wait and see. :-D)*laughing evilly
Wish me luck and let me know what you think!
Posted by Marianne at 8:36 PM No comments:

My 2nd Book, Collared in Love, Comes Out Tomorrow!

After this crazy year, I actually have a second book coming out tomorrow on Halloween. It is a different take on the holiday, no ghosts, ghouls or goblins, along with no vampire and werewolves (even though I love stories on those two ;) ). 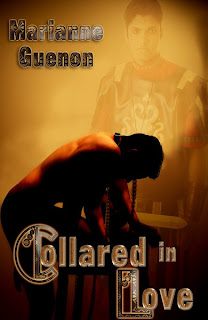 Collared in Love excerpt to entice you!


“Come here.”
Shocked at the firm command coming from nowhere, he didn’t stop to think about it, but did as he was told.
“Stand on the side of my leg.”
Curious to where this was leading, he continued to follow Razor’s instructions.
“Lay face down over my lap.”
That finally got his attention. “Like Hell I will.”
“You are a natural submissive and have long denied your needs, keeping them hidden not only from the outside world, but yourself as well. It is my duty and privilege to teach you the pride and strength in handing control over to someone else you can trust. Since I told you before I am not in the habit of repeating my orders, your refusal will cost you three additional spankings.”
“What the f—”
“You are now up to six. Do you wish me to add any more?”
Jayden stiffly bent over his lap, surprised to feel his cock straining against the shorts he had worn underneath his tunic. He hoped and prayed Razor wouldn’t notice. No such luck.
“I see your body knows what it wants, even if you don’t. Since this is new for you, I will go easy. I want you to count each spanking as you receive them.”
He could feel him push the back of his tunic above his waist and push down his shorts below his ass cheeks until the material was tossed on the floor. Feeling his face grow warmer, he could only imagine how ridiculous it must look for a grown man having his bare ass sticking up and over another man’s lap.
“Oh, meus servus.”
He felt soft kisses and tender caresses on each cheek, making his cock grow even impossibly harder. Then without warning, the first blow accurately struck its target. The painful sensation surged pleasure through his entire body.
“Remember to count off the strikes, or I will add another one in its place.”
Quickly he did as he was told. “One.”
Two more came rapidly after that.
“Two, three.”
Slow massaging replaced the strikes. “Very good, Jayden. Let go and let the pain free you.”
Another one came without warning.
“Four.”
The anticipation was part of the agony, not knowing when the next one would hit.
“Here come your additional ones for disobedience.”
The last six were administered without ceremony, one right after the other, counting off each time after one made its mark. Razor again massaged each reddened cheek, calming down the burn until it was no more than a dull soreness.
“Stand up.”
Silently obeying, he now saw the evidence of his arousal, his hardened cock tenting the front of his tunic, leaving a damp spot.
“You enjoyed the pain mixed in with the pleasure?”
He finally could be honest with himself. “Yes.”
“Yes, Master.”He looked down at Razor. “Yes, Master.”
Posted by Marianne at 12:19 PM No comments:

Welcome to my author blog on the web!

Marianne
Ithaca, New York, United States
I have very eclectic tastes - like to explore and discover new things all the time. Never too old to stop learning!